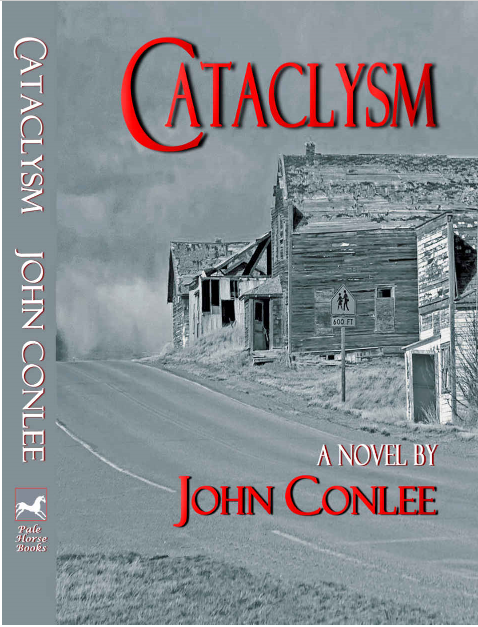 CATACLYSM is set in the near future, in the aftermath of a catastrophe of uncertain origin and scope.

When the novel opens, a small and diverse group of eco-tourists is touring a newly opened cavern complex deep in the Sierra Diablo Mountains in the Black Range of Southwestern New Mexico. The actual cataclysm occurs on the second day when most of the eco-tourists (but not all) are within the caves. When they emerge, they discover the horrific demise of the few who hadn’t been with them. Although the survivors have as yet no knowledge of the full extent of the catastrophe, in the days ahead they will gradually learn that the world they’ve always known has been irrevocably changed.

Miles from the nearest town, and with no means of transportation or communication, the survivors are thrown upon their own resources. Alone in a brutal environment, they know that their meager supplies of food or water will soon be exhausted. If they are to survive, it will require great effort, ingenuity, and courage. Not all of them possess those virtues, and not all of them do survive. For the small handful who do – people drawn from widely differing backgrounds and possessing a range of strengths, weaknesses, and foibles – they have been reduced to the most basic elements required to preserve their lives.

In the days and weeks to come, as they struggle to forge a functioning micro-society, they face challenges and dangers from within and without, The social community they create isn’t immune to serious stresses and strains; nor is the world in which they now find themselves immune to physical violence.

2)  Theme.  The novel probably doesn’t have a single over-arching theme, though it touches upon a number of topics and issues, some of them timely. For example, although the cause of the disaster is only hinted at, the possibility that it is man-made and a consequence of human irresponsibility is strongly suggested. The novel is not intended to be a treatise about mismanagement of the environment, but it is intended to celebrate a love for the land and to show how even the most inexperienced farmers can become stewards of the earth and nourish its fruitfulness.

3)  Influences. Post-apocalyptic fiction generally, and Cormac McCarthy’s The Road and John Wyndham’s Day of the Triffids more specifically. The novel also alludes to other classics such as Lord of the Flies and Mad Max. But the intention has been to offer a realistic depiction of what life in a post-apocalyptic world might actually be like, and not to serve up either a stark allegory or a more phantasmagorical portrayal of a post-apocalyptic world.

4)  Setting.   In contrast to Wyndham’s Triffids, which is a quintessentially British novel, I wanted Cataclysm to be quintessentially American. Rural Southwestern New Mexico seemed to be the perfect place for that. There was also, to be sure, the practical matter of a location in which a cave complex such as that in the novel might actually exist. And such a locale also provided an austere landscape in which the challenges to survival would be formidable. The small town in the novel which is called Dos Rancheros is modeled, at least to some extent, on the actual town of Lordsburg, New Mexico.

5.  Plato’s Allegory of the Cave?  If the novel reflects any influence of Plato’s classic work, it was strictly subconscious – though that is always a possibility, one supposes.

6.  Matters of Self-Governance.  Yes, the novel does concern this topic. The social dynamic amongst this small group of people evolves over time and finally emerges to provide a framework for a stable and workable society, one in which roles become defined and power structures established. Although no one social theory was being championed, perhaps notions of Athenian democracy, Jeffersonian democracy, and Emersonian self-reliance are all present to some extent.

7. Characters.  I didn’t intend for any of the characters to represent any particular thing. I wanted them as a group to reflect a spectrum of educated Americans from across the U.S., from New York City to Berkeley, California. Included is a teenaged runaway from Indiana, an elderly farm couple from New Mexico, and also a rough-and-tumble young boy from a trailer park who later becomes a central and vital figure within the group. I wanted the different characters to bring to the group quite varied life experiences and a wide range of interests and capabilities. Thus the suggestion late in the novel, not entirely facetious, that we are “poets, chess players, and farmers.”

8.  Literary references & allusions.  The novel contains numerous literary references – especially to poets and poems and to certain works of fiction. Most of them are directly relevant to the immediate context in which they occur, but they are also intended to reflect the cultural sophistication of several of the characters. For several of them, their knowledge and love of literature is a fundamental aspect of who they are. Also, the use of these references may suggest that for these people the preservation of a literary culture in a post-apocalyptic world remains of vital importance. The same is true for the several scenes that involve listening to music. For these characters, holding on to great musical works, whether those of Mozart, Simon and Garfunkel, or Johnny Cash, is a way to establish a vital cultural bridge between the world that was and the one which now exists.

JOHN CONLEE is Professor of English and Medieval Studies at the College of William and Mary. His primary field of teaching and research is English Medieval Literature, with an emphasis on Middle English poetry, the Middle Scots poets, the Arthurian legends, and Chaucer. He has edited scholarly texts on The Prose Merlin (1998), The Complete Poetry of William Dunbar (2004), and on Middle English Debate Poems (1991).

In addition to his academic works, he is the author of The Dragon Stone series of novels for Middle School readers, tales that relate the adventures of Merlin, young Arthur, and King Arthur’s faithful dog Cabal. He has also written a pair of interconnected baseball novels, The Heater and Rounding Third, as well as a novel of ancient Ireland entitled The Voyage of Maeldun. His most recent novel prior to Cataclysm, The Brothers Pendragon, focuses on King Arthur’s two illegitimate sons.

He has also pursued a life-long interest in Children’s Literature and has contributed several articles on children’s authors to basic reference works. He is an expert on the history of baseball in America and in baseball literature and film, areas in which he has conducted research that he has integrated into his teaching. His fascination with Celtic Studies, especially the earliest surviving literary texts in Irish and Welsh, informs the class he regularly teaches in Early Celtic Narratives.

John Conlee grew up near San Diego and attended the University of Southern California; he has graduate degrees from the University of Illinois. At William and Mary he directed the graduate program in English and twice served as Chair of the English Department. He has been actively engaged in Study Abroad Programs and has taught in several summer programs in the U.K., particularly in Cambridge and Bath, and also at the National University of Ireland in Galway. He has been instrumental in developing a scholarship program for William and Mary students wishing to pursuit summer study opportunities in the British Isles.